We just received an email from Kevin Spacey wishing us well as we head into tech this week. That’s a bit surreal…
HERE is the Broadway.com feature. 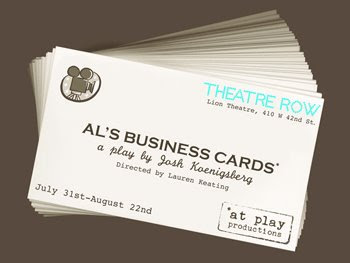 “When New Jersey Gaffing Assistant Al Gurvis accidentally gets his new business cards swapped with those of real-estate agent Eileen Lee, he’s mildly annoyed. Little does he know that this tiny mix up has sparked a chain reaction which will ultimately ruin his life. A comedy about waking up from the American Dream.”

About At Play Productions
At Play is a group of emerging artists that were brought together as part of Old Vic New Voices under the artistic direction of Kevin Spacey. In 2008, At Play put on The 24 Hour Plays at the Atlantic Theatre as their inaugural event. Our debut performance as a company featured a collaboration with such guest artists as Ethan Hawke, Peter Dinklage, and Jonathan Marc Sherman. Also last year, At Play produced Generation ME (Atlantic), (a)broadness (Center Stage NY), and WORK (Ars Nova). At Play was was named the resident company of The 24 Hour Plays Off-Broadway and was also welcomed into The Exchange, an Off-Broadway company that fosters the creative development of emerging artists.