I spent the last week up north, in Portland, Maine. I was able to see productions of HENRY V and Itamar Moses’ BACH AT LEIPZIG, as well as talk with theatre artists from the community. There’s exciting work happening up there, and it is always refreshing to get out of New York. I had never seen BACH, and was incredibly impressed by both the play and the production.

Portland Stage’s BACH featured a gorgeous set design by Wilson Chin, currently represented on Broadway by NEXT FALL, and performances by 7 wonderfully talented actors, who were both hysterical and tragic. BACH closed this weekend, but if you have never read it – go pick it up!

HENRY V is playing New York this week, at The Bridge Theatre on 54th St. It’s a 100 minute, quick-moving, very physical interpretation by a company of recent Emerson graduates. Check them out!

Also, coming soon will be details on my summer productions: COMEDY OF ERRORS, in partnership with the NYC Parks Dept., and FLY-BY-NIGHT, a new musical by Michael Mitnick, Kim Rosenstock and Will Connolly at Ars Nova, as well as teaching and directing with The Public Theatre’s Shakespeare Initiative. Hooray for summer! 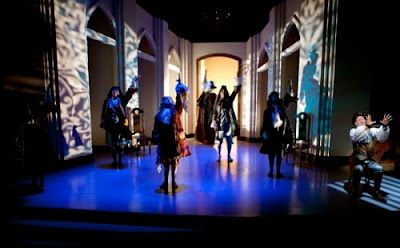